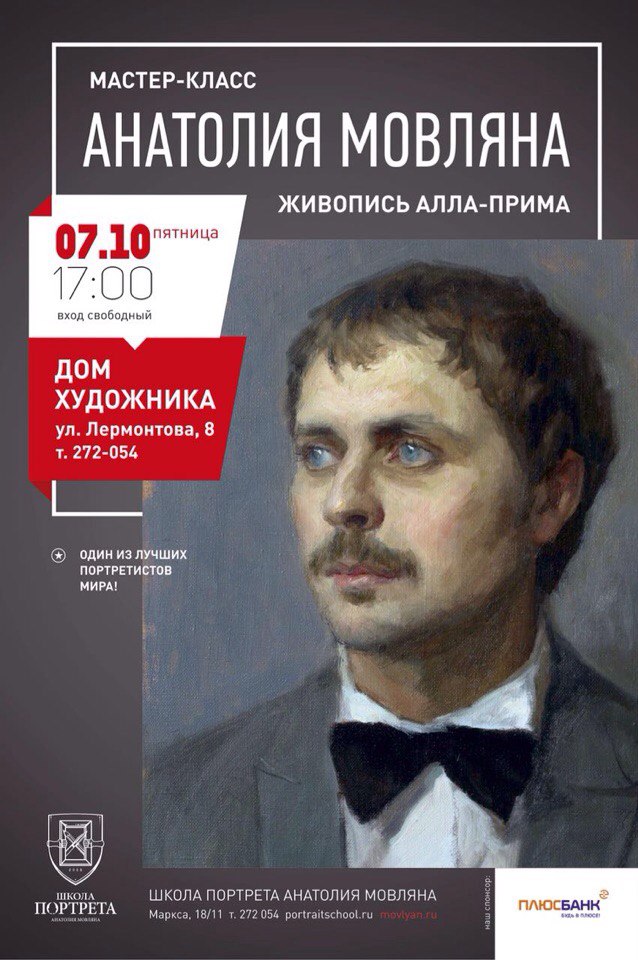 I met Anatoliy Movlyan at the Portrait Society of America 2016 The Art of the Portrait conference.  Attending his first conference, Anatoliy received a Certificate of Excellence for his witty self portrait.

The painting, his interpretation of a man examining himself in the mirror while shaving, was quite bold and unusual and caught my eye weeks before I even arrived for the conference.  Introduced at the conference, as I got to know him and his wife Olga, I found his story fascinating.  I soon realized he is a risk taker and not only with his subject matter.  After all, he came to the United States all the way from Omsk, Siberia without knowing the language or knowing anyone in the country.

Anatoliy is a daring serious artist who started his career in his thirties without any former art education, unheard of in the country of Repin and Serov Academies.  He spent years teaching himself through the study of a variety of books, in particular Kiplik’s “Painting Technique” which he considers a fundamental manual for artists.  It was this book that started it all for him.  He made it in the art world on his own, and was accepted into the art community once he became an established artist.  He is also a giving teacher, and it was this subject that I wanted to learn more about.

Anatoliy established the Movlyan School of Portrait in Omsk (Russian Siberia) in 2008. Over the next three years, he devoted all of his efforts to building a solid accredited program.  He took time off from his own work to pursue his goal to provide his students, in a remote Siberian town, with an opportunity he did not have, which was to provide a harmonious art education at any age and for any level.  He also aimed to form a social group of artists, to create camaraderie of kindred spirits.  He eventually found other teachers who joined him in this quest, and so the school grew and developed into an accredited institution.  It may be that his originally lonely path turned into a desire to be part of the art community of likeminded artists who share his passion.  Building on this success, Anatoliy opened his second school in Ekaterinburg.

One thing that was amazing to observe was that he continued to teach while at the Portrait Society conference.  Even though he was half-way around the globe, he received emails with his student's work.  I could tell he deeply cared about their progress.  That’s a trait of a true teacher and his pride in his two schools and his student's success was contagious.  Through many conversations during the conference, and detailed emails thereafter, here is what I learned about Anatoliy’s approach to art and to teaching.

Anatoliy's students choose between a one-year Still Life course or a three-year Portrait course. They can also stay for the fourth year to finish figure drawing and painting classes.  They study the main art disciplines including Drawing, Painting, Sculpture and Art History, and are required to attend three 2.5 hour classes per week.  Their first day starts with drawing straight lines, triangles and circles, with the emphasis on the steadiness of the line.  Perspective studies follow.  Then students turn to drawing 3-dimensional objects (cubes, spheres) in space.  Value relationships (achieved with cross-hatching) are fundamental (later carried on further in monochrome paintings as a starting point of the Painting classes).  This is where students spent most of their time and effort.  The right value relationships will carry a drawing or a painting in the future works.   Once values are understood and monochrome paintings are mastered, color is introduced to students (color wheel, temperature relationships, saturation).

Upon completion of classes on a specific topic (perspective, value relationships, anatomy), their proficiency is evaluated by the instructors.  A student is not allowed to proceed further until he or she fully masters this concept.  Instructors are also regularly evaluated by the faculty and students, and their compensation is directly affected by their evaluations.  Both schools conduct yearly exhibits where the work of students of all levels, as well as of the faculty, are shown side by side.  This develops further camaraderie and connection that many carry through years of studies and work, long after graduation.

As Anatoliy spoke about his teaching methods, I found them to be similar to some of the ateliers in America, which is not surprising.  Anatoliy combined his research of Russian art school methods with teachings of Nelson Shanks and Richard Schmid, to name a few.  Students regularly copy works of American masters to understand their techniques.  I am not sure if ateliers in the US do the same with Russian art.  It seems like a great way to learn from each other!  They also copy works of the Old Masters – Serov, Repin, Van Dyke, Sargent.  They are also very familiar with many contemporary American artists and their works.

And of course, the students are equally influenced by contemporary Russian, Ukrainian and other European artists.  Through connections that Anatoliy established in Moscow and St Petersburg, the schools learn about (and even own paintings of) some of the most prominent contemporary realists, such as Nikolai Blokhin (a well known artist and teacher of Repin Academy), Bato Dugarzhapov (one of the best colorists), Pavel Rizhenko, Alexander Voronkov, and others.

Each year, Anatoliy’s schools provide tuition scholarships to several talented students.  One of his schools even paid the tuition for a student to study sculpture in Czech Republic.  Anatoliy and his wife are so committed to their student's success, they even accompanied him to the school to make sure that this student got situated and had what he needed to proceed with his studies.  They spoke with such pride about this student, showing once again how invested they were in their work and in their pupils.

The methods taught in Anatoliy’s schools prove to be successful.  Many alumni are accepted to the top Art and Architecture Schools in Moscow, St Petersburg, and even San Francisco.  Many of his students receive full scholarships or grants from the government.

Being a teacher is more than a career to Anatoliy.  He wants to influence and develop a new generation of artists, and he truly believes that he is meant to do this work.  He has found his purpose.  I hope that he continues on his mission with the same forceful energy and inspiration he shared with me during those three days in April at the Portrait Society event.  I gained way more during the conference this year than I even imagined.  I gained a new friend.  Spasibo, Anatoliy!

Olga Krimon was born in Odessa, Ukraine and received her academic art education in Kazan, Russia.  She holds a BA in Art History and a MBA. She continued her studies with Glen Orbik and Jeremy Lipking. Her drawing, Yin and Yang, was awarded First Place Drawing at the Portrait Society's 2016 International Portrait Competition.

She continued to grow and develop her skills later in America, through drawing classes with Glen Orbik and painting classes with Jeremy Lipking.  Olga also holds a BA in Art History, and she credits it with providing her the rich visual vocabulary that is instrumental for defining her path as an artist.  She also received an MBA making her well grounded in the business side of an artistic career.

Krimon continued to refine her craft through independent studies and daily practice.  Over time, Olga developed her own style grounded in fundamental principles of academic realism, sensitivity to subtle value and color transitions, and yet bold energy of movement and expressive brushstrokes.  Olga’s Figurative and Still life paintings are recognized by the Portrait Society of America (International Competition 3rd Honor Award 2014, Certificates of Excellence 2011 and 2015, Members Only Honorable Mention 2014) and American Art Collector Award of Excellence, Oil Painters of America Western Regional Competition 2014.  She is also a finalist in 2015 Art Renewal Center (ARC) International Salon Competition.  Olga exhibits with Oil Painters of America, American Impressionist Society, American Women Artists National Shows.  Growing up she was (and still is) largely influenced by Repin, Serov, Brullov, Levitan, Kramskoy, Fechin and other Russian titans.  She then discovered Sargent, Zorn, Sorolla and Cecilia Beaux, and to this day she continues to examine the movement, the bold brushstrokes and the value arrangements in their pieces.